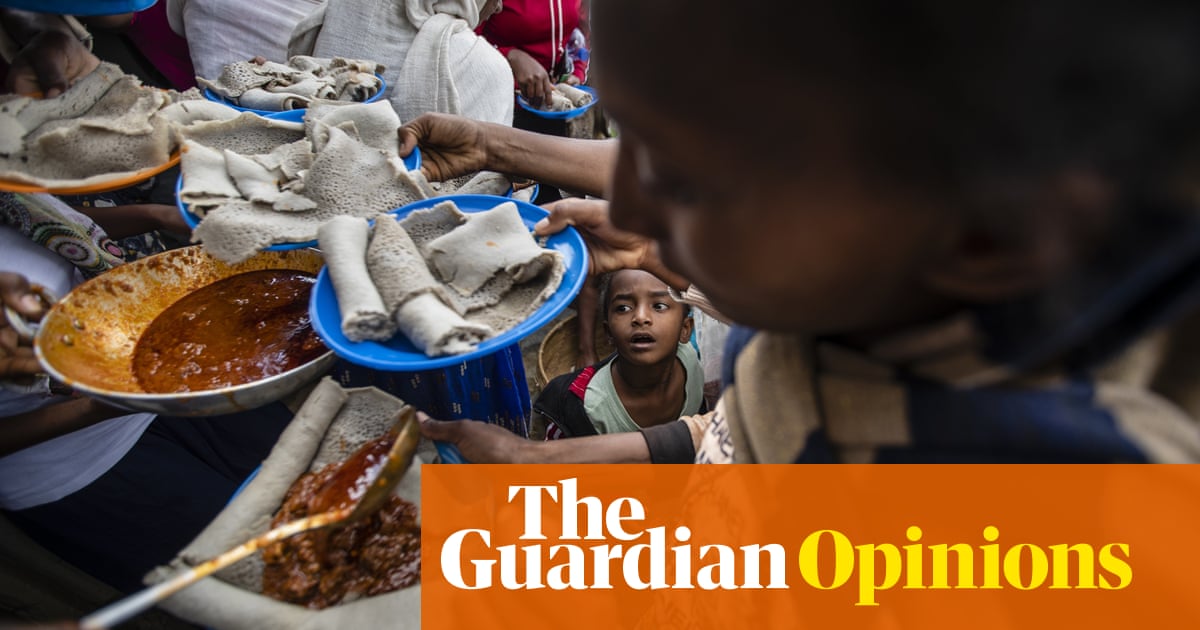 In the early 1980s, as a terrible famine claimed between 400,000 and 1 million lives in Ethiopia, the international community responded to what was widely misunderstood and misreported as a natural disaster. Famines are never just a matter of drought. Human Rights Watch later noted that Ethiopia’s repeated crises – especially the devastating one of 1983-85 – “were in large part created by government policies, especially counter-insurgency strategies”. Tigray was “the very nadir of the famine”, as a destructive army offensive was accompanied by the deliberate blocking of aid.

Now famine has reached Tigray again – and once more, it is because an Ethiopian government is at war with the Tigray People’s Liberation Front. Most of the 5.5 million people in the region need food aid. Over 350,000 are in famine conditions, and 2 million more are on the brink – more than a third of the region’s population. They include 33,000 children at imminent risk of death.

The UN estimates that 90% of last year’s harvest was lost. The displacement of millions of residents, general disruption and utter disregard for civilians have contributed to the disaster. But its top humanitarian official, Mark Lowcock, has warned that food is being used as a weapon. He accused forces from neighbouring Eritrea – supporting the Ethiopian prime minister, Abiy Ahmed – of “trying to deal with the Tigrayan population by starving them”. Witnesses have described soldiers deliberately torching crops and grain stores, and slaughtering cattle needed for ploughing. Mr Lowcock said they had also deliberately blocked aid shipments.

The conflict between the central government and the TPLF, which exploded after months of political struggle, is a complicated one. All parties stand accused of war crimes. But of 130 aid access violations recorded by the UN in May, 108 were by Eritrean soldiers or Ethiopian soldiers, or a combination of the two; 21 by Amhara militias who have joined forces against the Tigrayans, saying they are reclaiming stolen land; and one by the Tigrayan opposition. The deliberate starvation of a population comes on top of the horrors already documented – including attacks upon medical facilities, massacres of civilians and sexual violence “with a level of cruelty beyond comprehension”, in the words of the UN.

The EU and the US have already suspended aid and imposed sanctions. The G7 communique issued a week ago called for an immediate ceasefire, unimpeded humanitarian access to all areas and the immediate withdrawal of Eritrean forces – three months after Mr Abiy promised that they would leave. There is, as yet, no sign of their departure. And while fighting appears to have ebbed somewhat recently, the fear is that, far from moving towards a resolution, both sides are using the time to prepare for more intense conflict. While a ceasefire and the massive scaling up of aid delivery are essential to avert an even more severe humanitarian emergency, they are also seen as a boost to the enemy. Bullish remarks from the federal government suggest that they have the TPLF on the run. It is far from clear that this is the case. The conflict looks increasingly entrenched: unwinnable, and with no prospect of negotiations.

This is already the worst famine since the one in Somalia a decade ago that killed more than 250,000 people. It could become much worse. Mr Lowcock has warned that a disaster on the scale of 1983-85 is feasible. Then, as now, the starvation is the work of humans, and humans have the power to stop it.

You may have missed